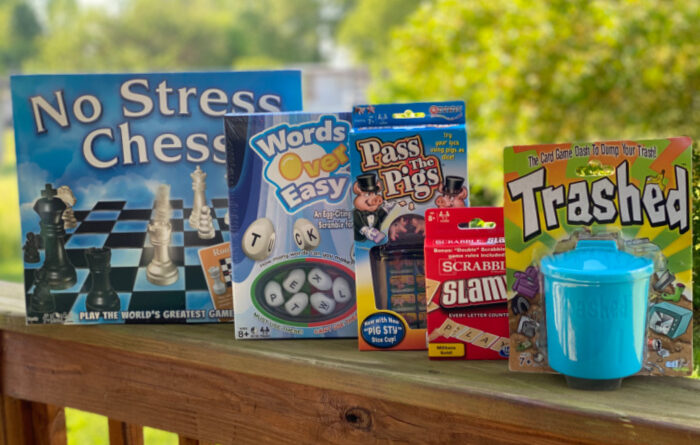 Reviews
June 4, 2021 Kristin
This post may contain affiliate links or I may have received the product free in exchange for my honest review. See full disclosure for more information.

Give your kids lots of stuff to keep them busy this summer with new games from Winning Moves Games. Winning Moves Games has a lot to chose from and these would also be a great addition to your family game night collection. Which one will be your favorite?

There is always on occasion where you can give these great games. Father’s Day is coming up, birthdays, your upcoming game night either way these will make great gifts. 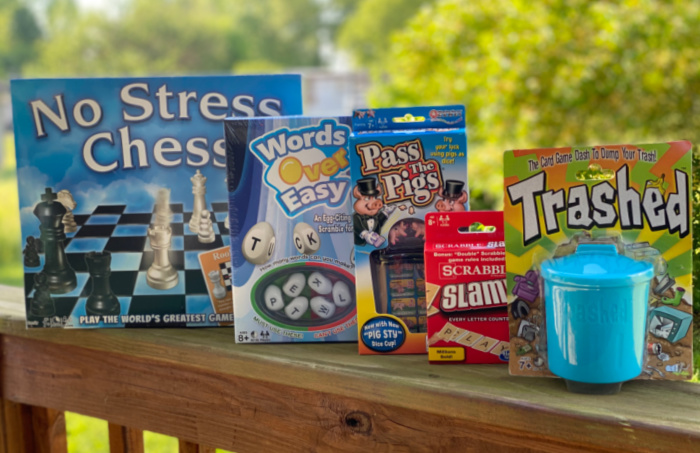 Winning Moves USA (WMUSA) is a leading maker of board games, card games, and puzzles. Since WMUSA’s first year of operation in 1995, the company has forged a close relationship with one of the world’s largest game companies, Hasbro, Inc., owner of Parker Brothers and Milton Bradley. As a result, many long-lived Parker Brothers and Milton Bradley games are now marketed by WMUSA! 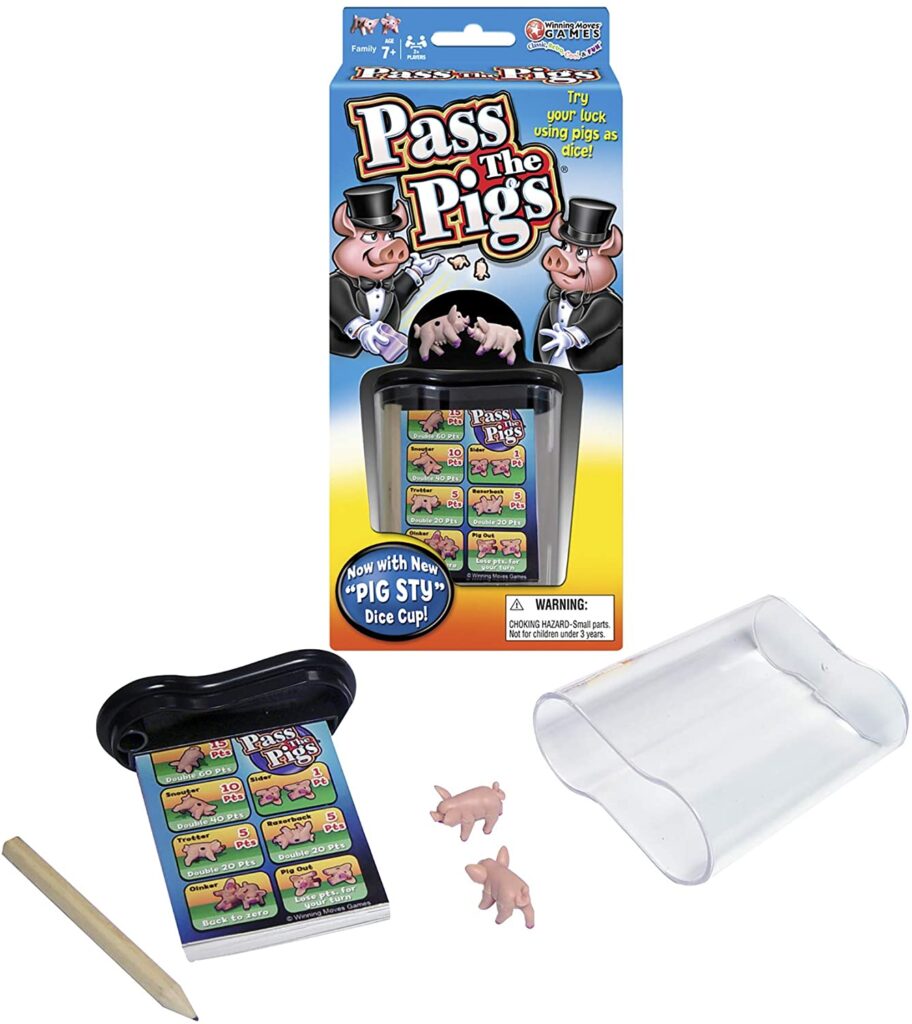 Pass The Pigs – Its’ fun, addictive and requires strategy, skill, and luck. Basically a dice game, with pigs that are weighted and have different values depending on how they land. Each turn involves one player throwing two model pigs, each has a dot on one side. The player gains or loses points based on the way the pigs land. Each turn lasts until the player throwing either rolls the pigs in a way that wipes out their current score, wipes out their total game score, or decides to stop their turn, add their turn score to their total score and pass the pigs to the next player. There are several variations to the game rules. One is the Hog Call, where a player attempts to guess the score their opponent is about to land. After scoring 20 points a non-throwing player may attempt a Hog Call. The non-throwing player must scream ‘sooee’! before the opposing players throw. The caller then guesses the score of the next throw. If correct, the caller receives the points thrown, and the thrower loses double the points thrown. Only one player may hog call per throw. 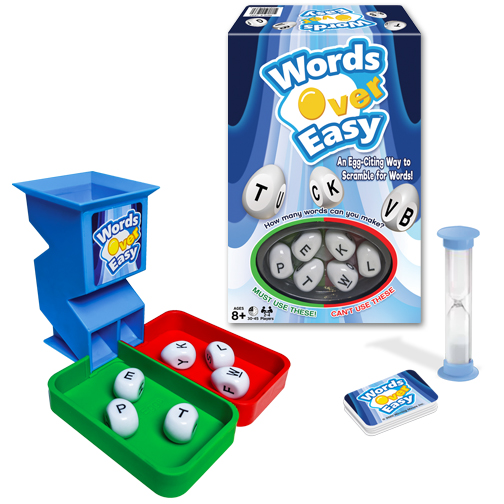 How do you like your words? Over easy, of course! Pop the Letter Eggs into the Egg Sorter to see which letters you can use to spell words. Letter Eggs that fall into the green side are good, while Letter Eggs that land on the red side are rotten. Players scramble to come up with words using all the letters, face-up, on the “good eggs” and none of the letters from the “rotten eggs”. Great for word game players of all ages, so get cracking! 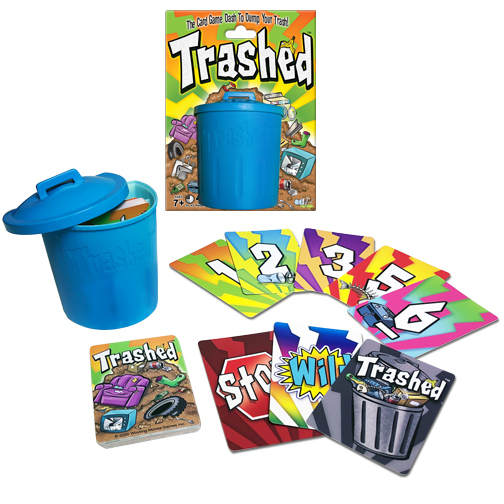 Trashed was inspired by the old-time favorite card game Garbage. With custom cards and unique twists to gameplay, Trashed takes the classic game to a whole new level. Your goal is to get your cards lined up in the right order, from 1 to 10. But, look out for the terrible Trashed card! Wild cards allow for excitingly big turns, while Stop cards will stop you in your tracks! 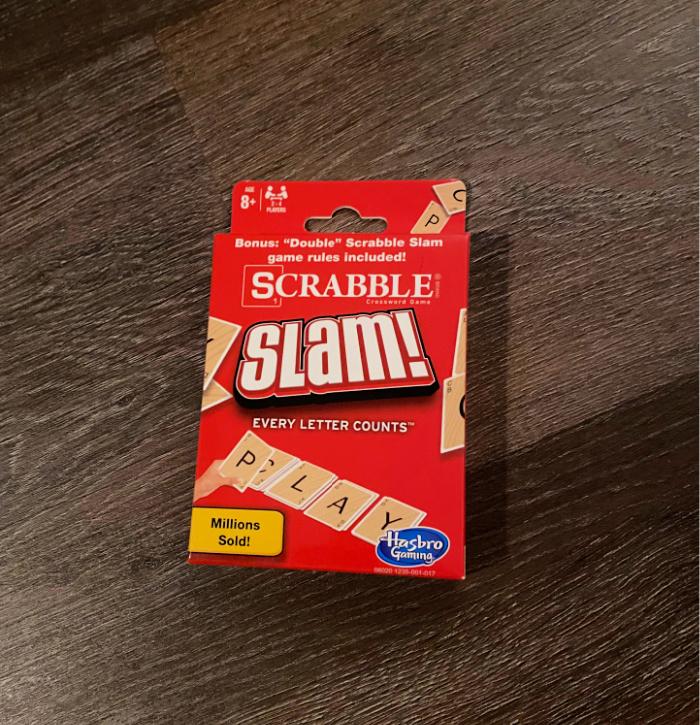 Scrabble Slam is the best-selling, fast-paced and easy to play card game version of Scrabble. Start with any 4-letter word on the table like “CAKE” and yell out “Ready, Set, Slam!” and the race is on. Quickly change the existing word, 1 letter card at a time, to create a new word like “BAKE” then change it to “BIKE” and so on. The first player to play out all their cards wins!

You can purchase on Amazon and at other retail stores. 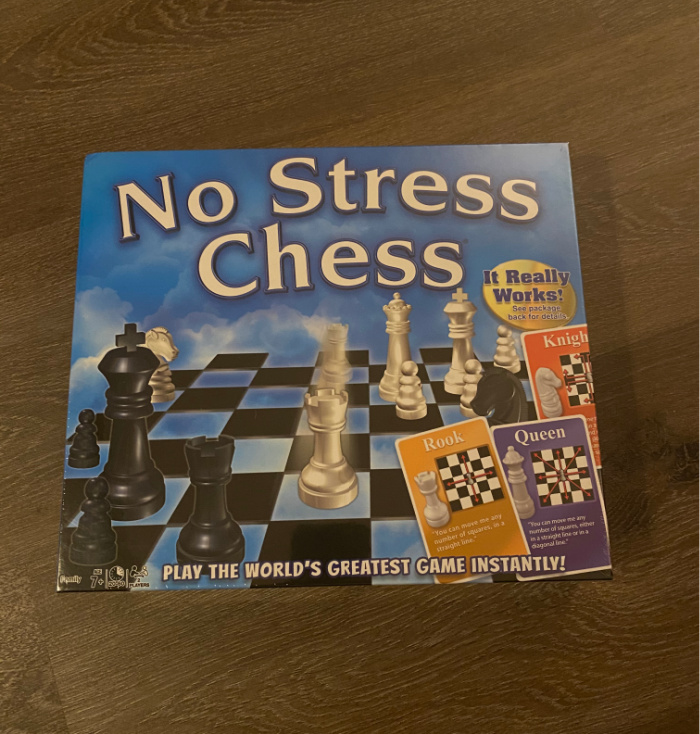 Winning Moves Games is proud to present ‘No Stress Chess’, a game that will help you learn the world’s greatest game – Chess. You can play instantly because the special game board guides you to set up your pieces and each card in the innovative deck shows you how to move the piece it pictures. You just set the pieces on the board, shuffle the deck, and begin to play! No Stress Chess teaches players the moves of all the Chess pieces. The game is played on a regulation Chess board, but doesn’t require the movement knowledge or planning of Standard Chess. No Stress Chess can be played at several levels of difficulty, gradually introducing players to Standard Chess in incremental steps. When you’re ready, just flip the board to its Standard Chess board side and play the authentic ‘king of games’.

Stay connected with Winning Moves Games for their latest products: